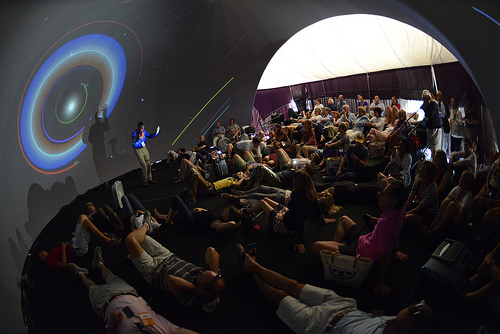 Buckminster Fuller famously claimed that we Earthlings are all astronauts aboard a beautiful planetary spaceship. This summer, The Elumenati helped participants at the Aspen Ideas Festival to visualize what he meant. We transformed a 40′ geodesic dome built by Fuller on the Aspen Institute campus into an immersive theater, installing a custom internal projection screen and a 500 series projection system with WQXGA resolution.

Over the course of the week-long festival we also worked with scientists from the Worldviews Network to present a series of interactive shows about our extraordinary home in the cosmos. Employing interactive data visualizations from land and space-based satellites, the presentations included Liquid Gold: Are We Taking Water for Granted?, Interactive Tours of the Observable Universe, Visualizing Worldviews: Between Cosmos and Cognition, Fire and Lights: Mankind Illuminating the Cosmos, and Perceiving Home: New Perspectives on our Changing Planet. The theater also featured the California Academy of Science’s Life: A Cosmic Story and the American Museum of Natural History’s Cosmic Collisions.