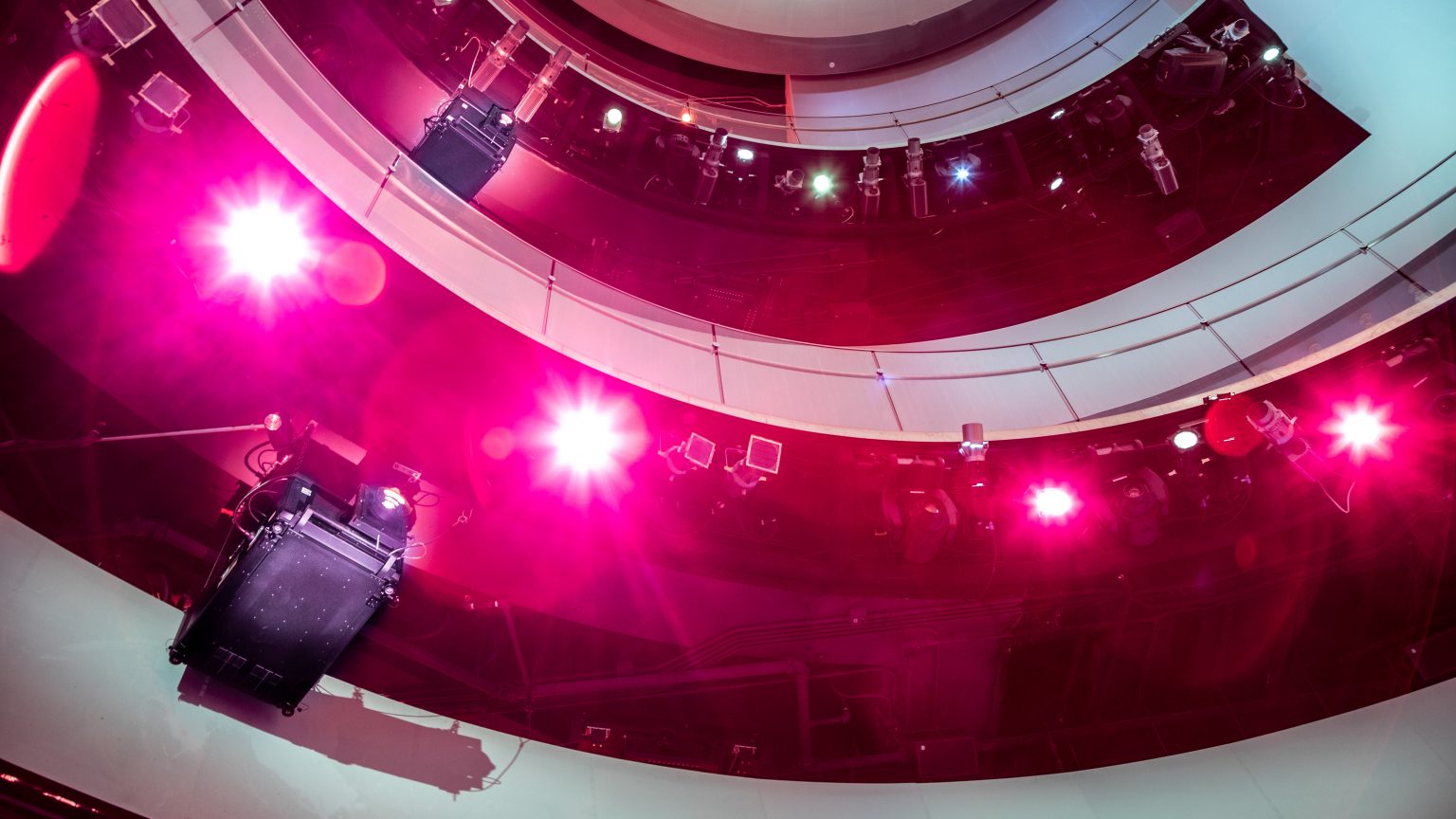 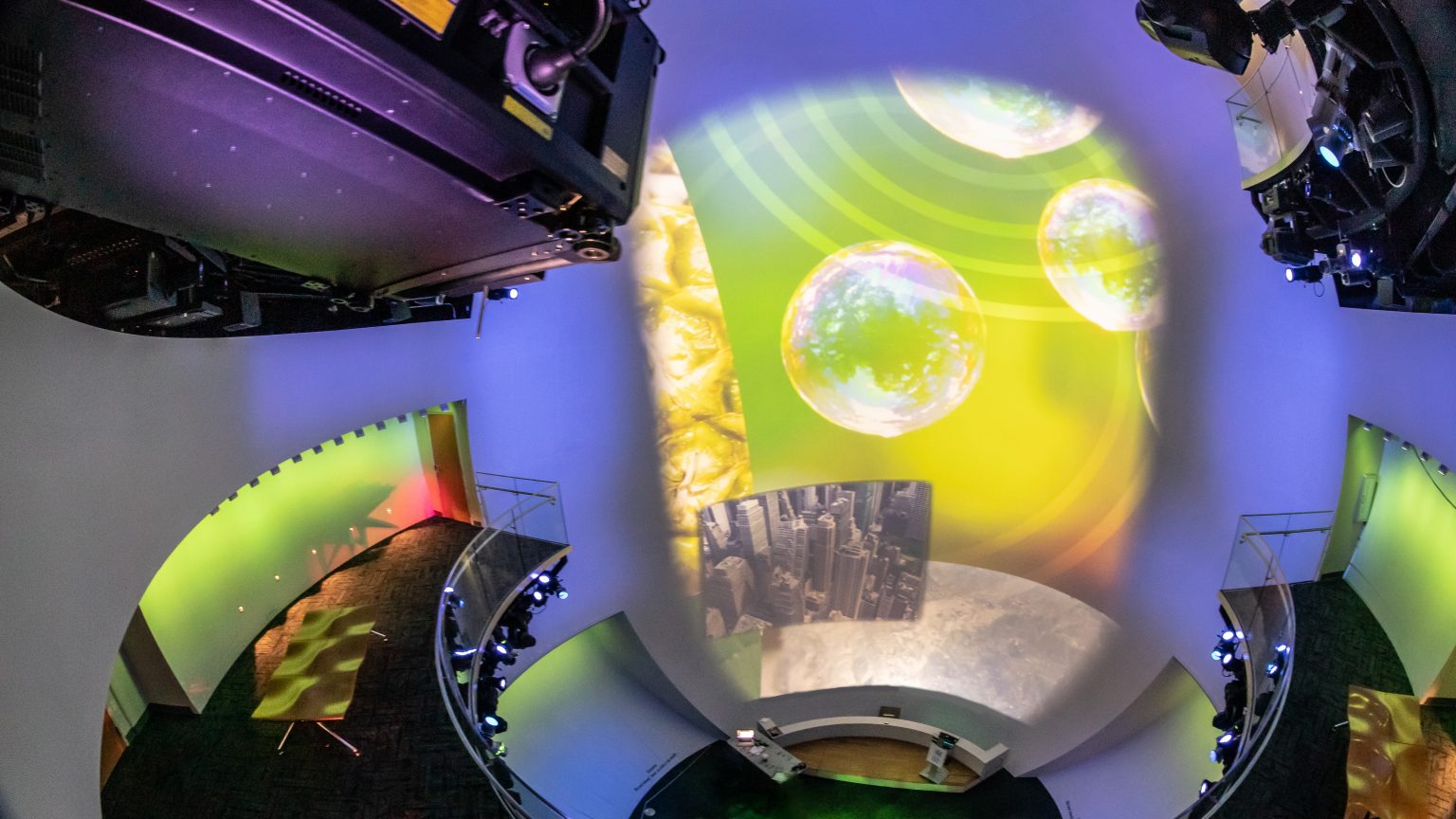 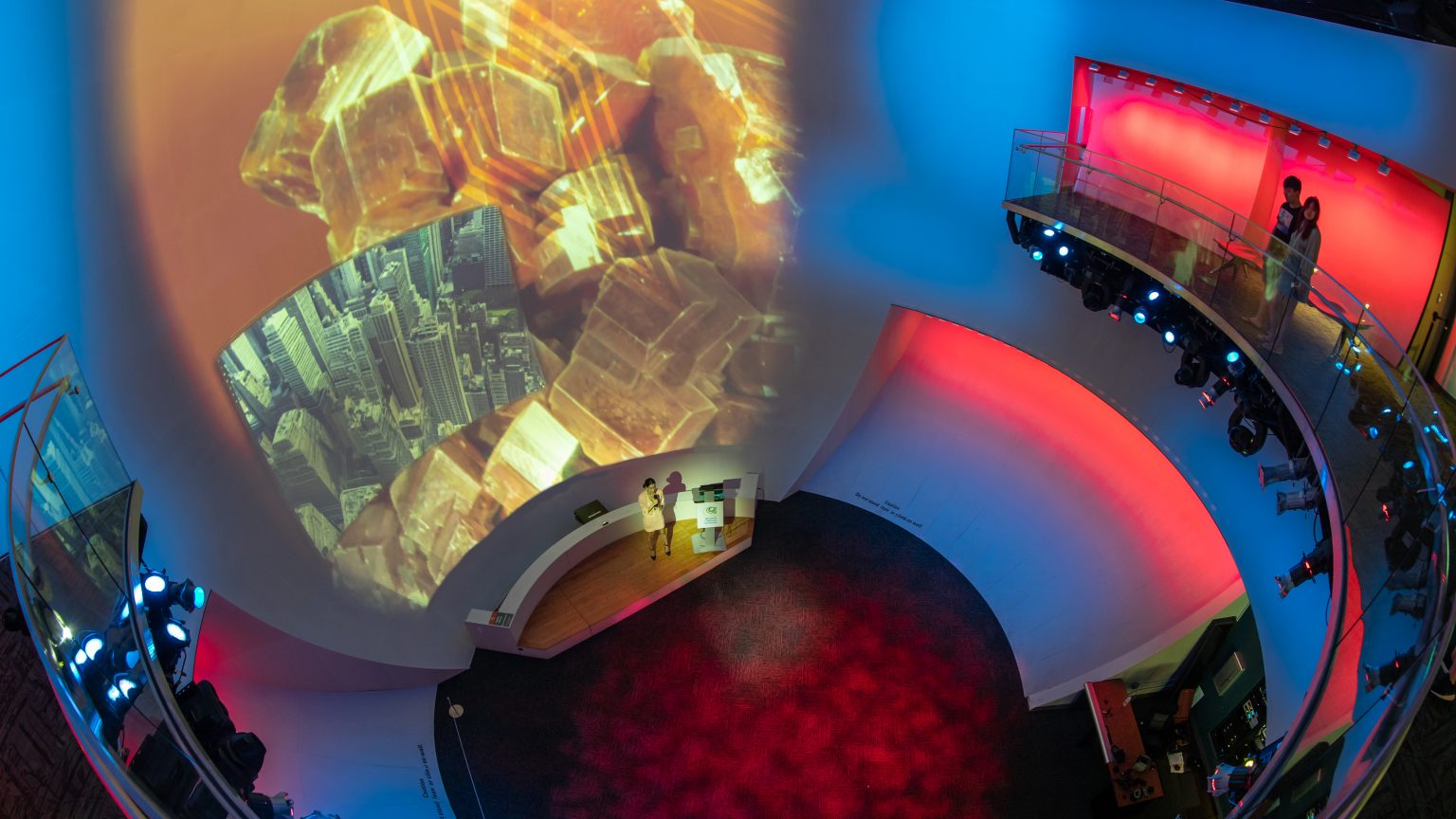 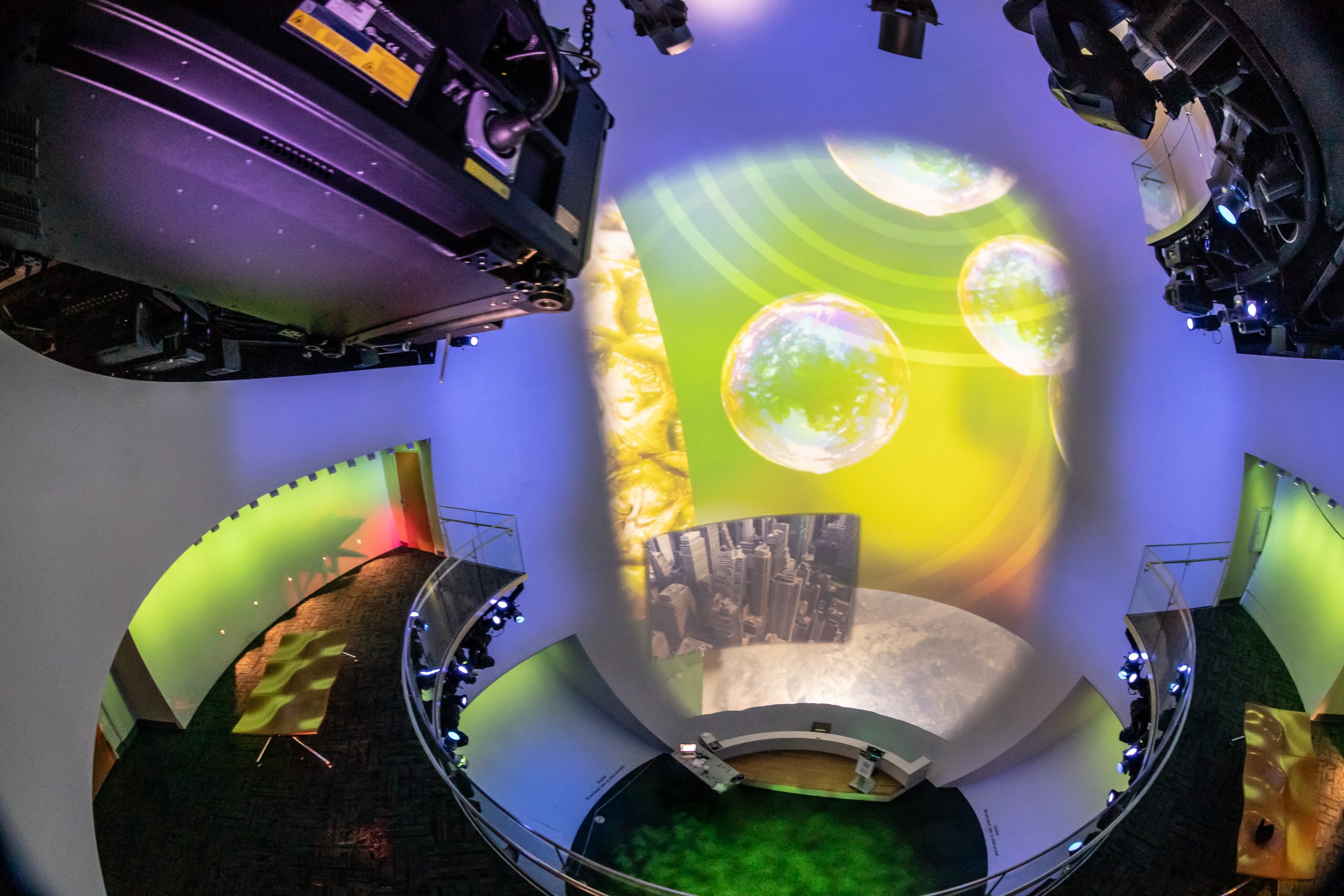 Our collaboration with the North Carolina Museum of Natural Sciences continued this year as we upgraded the SECU Daily Planet, a three-story theater with a 42-foot-tall screen. A blended projection system is driven by a customized image generator and WorldViewer’s Open Playground extension. Visitors experience the projected content from all three floors of the Nature Research Center. It’s currently live in ambient mode, and public presentations will launch with the Dueling Dinosaurs exhibit and research lab, projected for 2023. With WorldViewer, researchers can showcase their work on the big screen – both in person and through live streaming. Audiences can experience 360° video fresh from the field.

Following the Elumenati design philosophy, the new system increases image quality, audience immersion, and content capabilities while vastly simplifying operations and maintenance. We replaced six projectors with two, filling more of the screen with higher resolution and brightness. An OmniFocus projection system at the base of the screen surrounds presenters with immersive imagery. A single image generator replaces five servers. WorldViewer provides a single point of management for content production and show control, and expands the options for media display.

Projection solution: Two DPI Titan 26000 4K-UHD projectors are hung beneath the second and third floor balconies. The tilt angles optimize image brightness and blending uniformity from all possible viewing locations, with a single horizontal blend. A new addition to the theater design is an OmniFocus 300 series with a DPI eVision 11000 4K-UHD, surrounding the presenter with imagery to create a sense of immersion for the audience on the first floor. The OmniFocus image is blended into the main image for a single unified display. Detailed specifications:

The update replaces lamps with a laser light engine, reduces the number of components and minimizes warp and blend. We integrated Vioso’s automatic camera-based calibration solution, so routine calibration happens in a matter of minutes. Operations and maintenance are simpler, more efficient and more cost-effective.

Image generation with WorldViewer and Open Playground: A single rack-mount image generator drives all three projectors, manages blending and geometry correction, and supports both content creation and show control. We replaced four media servers and a show control unit with just one machine.

The Elumenati team migrated the museum’s library of existing content into WorldViewer, which drives the Daily Planet’s multiple presentation modes. In ambient mode, content can play in a loop, at random, or in a programmed sequence. Presentation mode is enhanced with live inputs up to 16 channels. Live streaming, camera feeds, or PPTs from a presenter’s laptop can be incorporated and placed anywhere on the screen with WorldViewer’s real-time compositing capabilities.

The new system simplifies the content creation process. WorldComposer, WorldViewer’s GUI-based editor, provides drag-and-drop media management with no render time or programming required. With chapter-based content management, museum staff will create playlists from templates, and refresh them on the fly with multiple folder-based content loading options. WorldViewer also opens new content possibilities. The Open Playground extension’s texture sharing pipeline supports any Spout-enabled application. Third-party applications are shown at their native resolution – for example, OpenSpace, on which NCMNS and the Elumenati are both development partners. All applications are driven from a single WorldComposer window.

Last but not least, WorldViewer creates a single point of management for lighting, audio mixing, and show control.

We look forward to seeing what the museum team creates in the new space!