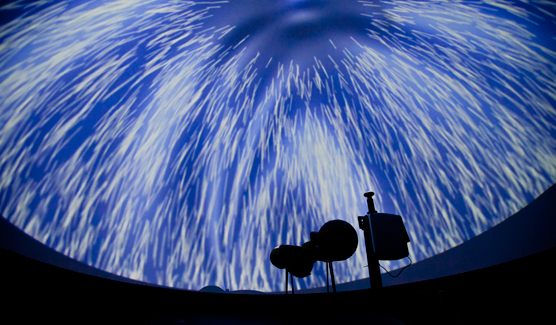 The GeoDome Evolver at the  MSUM Planetarium has been part of the Minnesota Regional Planetarium Network since 2011, with an OmniFocus 200 series projection system that complements their existing starball. The planetarium’s director is Sara Schultz, who has created the Solar System Ambassadors program and other innovative content. Sara says: “I love working with Elumenati and being a part of the GeoDome network. I have been able to create amazing experiences for my audiences using WorldViewer that I never could have otherwise. WorldViewer allows me to create truly multimedia experiences that can incorporate so much more content than only what is originally created for a planetarium. I can create and change things on the fly instead of needing to do a ton of complicated editing outside the dome to get things to look right. I love the flexibility it has provided for me and my facility. It has opened up possibilities I would only have dreamed of without it. This is especially important for my facility since I do not have the staffing to create impressive dome visuals on our own.”

MSUM is part of the Minnesota Regional Planetarium Network, science educators who collaborate to share costs and program development in a mix of fixed and portable GeoDome systems. All the systems are driven by our WorldViewer CMS and run on Elumenati IGs (image generating computers). With WorldViewer’s Open Playground Astronomy extension, network members drive OpenSpace, WorldWide Telescope, and Stellarium, all through a single user interface. Some sites have upgraded their OpenPlayground to also feature NASA’s Eyes platforms.  Additionally, some sites continue to incorporate live shows using Uniview, but are increasingly using OpenSpace for Digital Universe exploration as they phase out Uniview following SCISS’s dissolution. With WorldViewer’s WorldComposer content authoring platform, educators create stories for their domes with content from NOAA and NASA, 360° video and much more.